General Information: Formerly from Australia, Velocity rims are now produced in Jacksonville Florida. Complete wheelsets are built by The Wheel Department in Grand Rapids Michigan. The A23 is one of a growing number of rims available with 22-24mm wide tire beds. As compared with typical 19mm tire beds, the wider profile both increases tire volume and reduces tire deflection, leading to notably better traction, especially when cornering. Significant aerodynamic benefits are also claimed.

A23 rims are available in two wheelsets: The 20/24 “Pro-Build” set uses CX Ray spokes and alloy nipples, while the 24/28 “Comp-Build” uses double butted spokes and brass nipples. Though the “Pro Build” is marketed more towards road racing, Velocity assured me that it would be sufficiently stout for cyclocross given a rider of my size (5’10”, 165lbs). The wheels were tested during one week of harsh cyclocross riding in deep gravel and knotty single track. The wheels also logged about 150 miles on pavement.

Note on Scores: Don’t just look at the raw scores. Each score is relative to our reference wheel, a 32 hole, triple cross Mavic Open Pro. Further, scores should be considered relative to the needs and characteristics of individual riders.

At 1460 actual grams (1400 claimed), these wheels are very light for the price point and took over one pound off of the Felt Branded wheels on my F15X. (Variances in milling mean one can expect up to a 10% variance in the weight of aluminum rims.) For reference, these wheels are about 350 grams lighter than a generic entry-level cross or road wheelset and 60 grams heavier than Mavis Ksyrium SLS Wheels, which are about as light as one gets without using exotic materials.

In our lateral deflection test the “Pro-Build” wheels proved very flexible. Front radial wheels built on wide flange hubs should have no appreciable deflection under a 50lb lateral load. Both front and rear wheels, however, had notable amounts of flex. Given the strong build quality and the well-engineered hubs (widely spaced front hub flanges and differential drive/non-drive rear flanges), I attribute the flex to the rim, which does not fare well with such low spoke counts. (I have built numerous Velocity rims with 28 and 32 spokes and was very satisfied with their lateral stiffness.)

Despite being quite flexible in our shop test, rim deflection was virtually unnoticed on the trail when using 32mm cyclocross tires at low pressure. With such a high volume tire, energy is dissipated in the deflection of the casing before it is ever transferred to the rim. (A 23mm road tire, however, will transfer more energy directly to the rim and will not be as forgiving of a soft wheel. Further testing with road tires is required.) On the trail, these wheels performed admirably. The low rotational mass meant they saved energy when negotiating technical sections, where one has to spin up from a near dead stop. The wheels also climbed remarkably well, making easy work of our test climb, which includes about ¼ mile of deep gravel. The wheels seemed to float on top of loose gravel and dirt and they descended with aplomb, which was unexpected given their low spoke count and flexibility.

In 20 years as a professional wheel builder, I have never seen a better built factory wheel than the A23. The A23s are not a stiff enough rim to mask poor crafts(wo)manship and the Pro-Builds stayed rail straight after a week’s abuse on very rough terrain under a rider who is not known for his finesse. When I say “rail straight,” I mean that after a week of abuse, the A23s look like they were just taken out of the stand of a top-notch builder. Here’s a quote from The Wheel Department’s website: “We are very confident in the quality of our builds. When you receive a wheel built by The Wheel Department it will be ready to ride. Our wheels should not need to be re-trued or re-tensioned after initial riding…”. They’re not kidding.

The Velocity race hubs are available separately and seem a wonderful platform for building any high-end wheel. Widely spaced front hub with  a high / low flanged rear hub, they weigh roughly the same as DT Swiss 240s at a fraction of the price.

In use, the Velocity A23 Pro-Build is light, fast, and plenty stiff enough for a lightweight rider. If you weigh more than 180lbs or plan to use these wheels exclusively on the road, where the low tire volume may lead to more rim deflection, you may want to consider other options from Mavic or Fulcrum. If you are 160lbs or less, however, you’d be hard pressed to find a better performing wheel then the A23 Pro-Build. 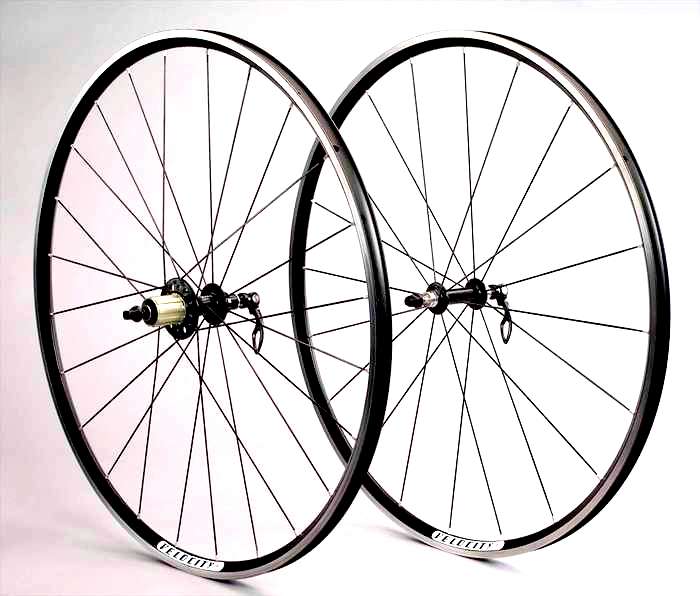