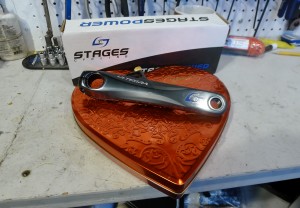 This Valentine’s day Durham Cycles was gifted with one of the first batch of Stages Cycling power meters. Below we give you a rundown of the potential benefits and drawbacks of the newest competitor in the power market and provide a real-world data comparison between the Stages meter and the PowerTap G3.

Stages meters should, in theory, make their competitors very nervous. Stages meters do not require a proprietary hub or crankset (like PowerTap and Quarq, respectively), but are rather built into manufacturers left crank arms. The elegant looking strain gauge adds a mere 20 grams to a typical drive train (compared to 90+ grams for other systems), is easily installed, and is easily swapped between bikes with the same bottom bracket. Most significant for the average consumer, however, may be that Stages meters, which begin at $699, can cost less than half as much as other power meters. Reducing the total cost of entry into training with power even further, Stages meters are Bluetooth enabled, meaning they can deliver data directly to consumers’ smartphones, negating the need to spend several hundred dollars on a Garmin or other ANT capable cycling computer. (ANT is the wireless standard used by Saris, Garmin, and others.)

So whats the down side? Stages meters can only be retrofitted to aluminum crank arms, meaning that if you’re riding Sram Red or Force you’ll have to use a Rival left arm. Stages currently has no offerings for FSA cranksets, nor do they have BB30 options outside of Cannondale Hollowgram. Given the popularity of the BB30 platform, we can only guess that Stages is having problems sourcing arms from SRAM, which owns Quarq, Stages competitor in the power market. 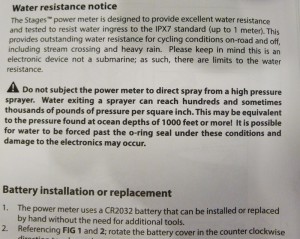 Stages addresses water resistance issues (the bane of most power meters) with a bit of humor.

The stages meter comes with clear instructions and is easy to install. (Installation is the same as with any crank arm. Unlike Quarq crank-based systems, there is no need to mount an angular velocity magnet to your bottom bracket.) Like all power meters, the Stages meter should be calibrated regularly. Calibration procedures depend on the computer or application you are using. The Stages crank arm will need to be placed in the 6 o’clock position before calibration or you will receive an error message.

After installation, the unit was immediately recognized by our Garmin. Unlike other power meters, the Stages meter won’t begin to transmit power data until it receives actual pedaling force. (I.e. you have to take it out of your work stand and put your foot on the pedal to get a wattage reading.) Because the meter requires actual pedaling force, however minimal, there is short delay before data appears on your screen. You will also notice in the tables below that at very low wattage the meter may appear to “drop out,” but we suspect that this is a latency effect and not lost data. (In any case, the “drop outs” are rare and have no practical effect on the instant or averaged data.)

After installing the Stages crank for triathlete Tim W, we were pleased to receive an email the following day with a side-by-side comparison of the Stages meter and the PowerTap wheel which Tim had been using for the past couple of seasons:

“…I thought you would be interested in the data I collected on my ride today comparing the Stages Power on my crank with the PowerTap wheel. I was really pleased to see  consistent the data between the two power meters. I rode 4 x 12 min intervals. The average power for these intervals was remarkably close: Stages 219W, 217W, 194W, 188W. PowerTap 223W, 218W, 196W, 187W. Probably within the margin of error.

Attached are snap shots of the power files. The first two pictures show the unfiltered power data as displayed in Garmin Connect. There are clear differences between these two data sets. However, the second set of pictures show the 30s average power from RideWithGPS. Now you can see that the data is almost identical. So, whereas there may be some real time differences between the Stages and PowerTap, for training purposes I think the Stages Power device works just fine.”

For illustration purposes, we have overlaid the PowerTap and Stages graphs. As you’ll be able to see, Tim is correct, there are some differences in the instant readings, but the 30s averages are almost identical. It should be pointed out that we do not know which of the instant readings is the more accurate of the two. Given the latency effect of the Stages, I might wager the Powertap is providing more accurate second-by-second data, but second-by-second data is of limited importance for training. A comparison of the 3second averages might be helpful in future tests. Since there is no wattage lost in power transmission from crank to hub with the Stages meter, it may provide a more accurate 3s snapshot than the PowerTap, but, again, there are few practical implications of what are likely minor differences. (Further, Powertap accounts for drive train power loss in its software.)

Overall we are very impressed with Stages’ offering, and we suspect that their biggest problem may be satisfying customer demand. While the longevity of the Stages meter is unknown, the company has been around for a while providing power meters for stationary bikes, which suggests they have the infrastructure and experience to deal with warranty and maintenance issues. Despite the risks inherent in being an early adopter of a new product, riders using Shimano cranks may want to seriously consider the Stages meters before investing more than twice as much in a Powertap or Quarq.