Bikes are in some ways like clothes – most people can get something “off-the-shelf” that fits well enough to make them happy. If you’re serious about fashion or serious about cycling, however, fit gets a bit more complicated. In many cases, a rider will be “in-between” sizes, and while he or she can be made equally comfortable with a larger or smaller frame, each frame will handle quite differently.  So how does a fitter decide which size is best if a rider can be equally comfortable on two different frames?

We’ll use Sarah Guilbert, elite rider for the RTO National Women’s Team, as our case study. Guilbert’s fit session dropped her from a 52cm frame down to a 47cm frame. Here is how we decided on her new frame size:

We began by measuring Guilbert on her existing bike, a 52cm Scott addict with an 80mm stem. 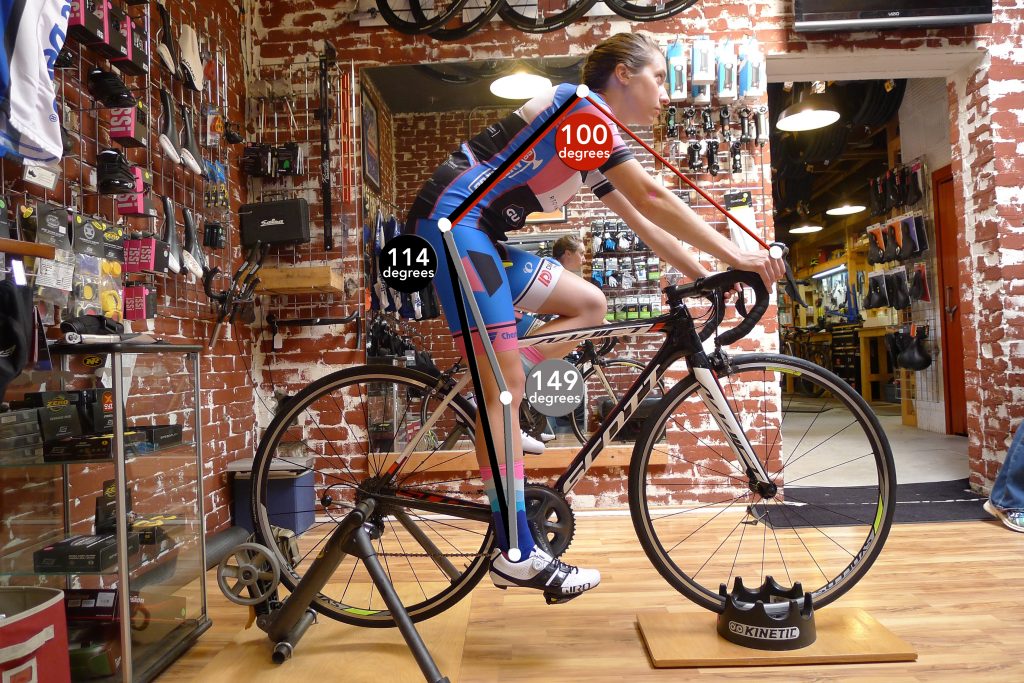 Almost all of Guilbert’s angles on this bike are within the normal range for an athletic, competitive racer. Her knee angle (grey lines) of 149° is a bit higher than we’d place a recreational cyclist, but provides excellent leverage. Her hip angle of 114° (black lines) is comfortable when climbing or in the pack, but still allows a low, powerful, and aerodynamic position when in the drops or with wrists draped on the hoods. The only issue with the fit is the shoulder angle of 100° (red lines). Shoulder angles greater than 90° tend to fatigue the upper arms and lower back. While we can theoretically shorten the stem and get the shoulder angle where we want it, shorter stems increase steering response and can make for “twitchy” handling – which isn’t something a pro wants when speeding down hills at 60 miles an hour or when riding shoulder-to-shoulder in a pack. Further, even if we reduce the length of the stem to create a more comfortable fit, the bike simply will remain too “long” to handle well, as illustrated in the photo below. 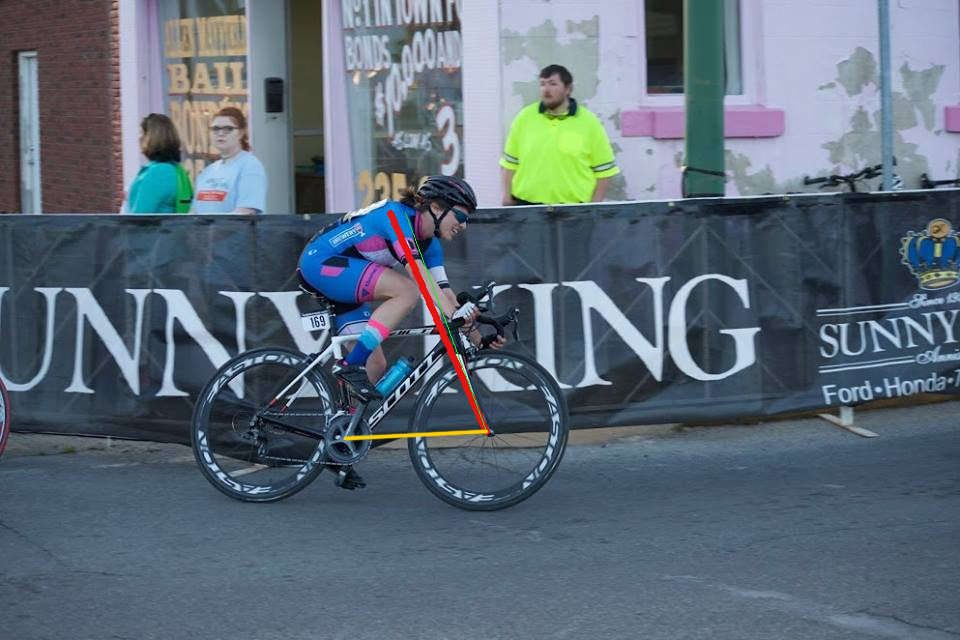 Note that the weight of Guilbert’s shoulders (red-line) falls behind the steering axis of the bike (green line), preventing her from properly weighting the front wheel for traction when cornering. A shorter stem does not change the position of a rider’s shoulders relative to a bike’s steering axis. One could theoretically increase Guilbert’s weight on the front wheel by sliding her hips forward, but that would compromise the efficiency of her pedal stroke. The only way to get the rider’s weight distributed properly between the wheels in this case is to decrease the bike’s “front-center” measurement, the distance from the bottom bracket to the front hub (orange line).

If we reduce the bike’s frame size, we decrease the front-center measurement, moving the bike’s front wheel under the rider’s shoulders, which will provide more balanced weight distribution and better traction. Combine the better traction with the tight turning radius of a smaller frame and the stability of a longer stem (which has been increased by 1cm to make up for the shorter top-tube), and Guilbert’s new bike should have a nimble but predictable ride.

Here is Guilbert on her new 47cm frame: 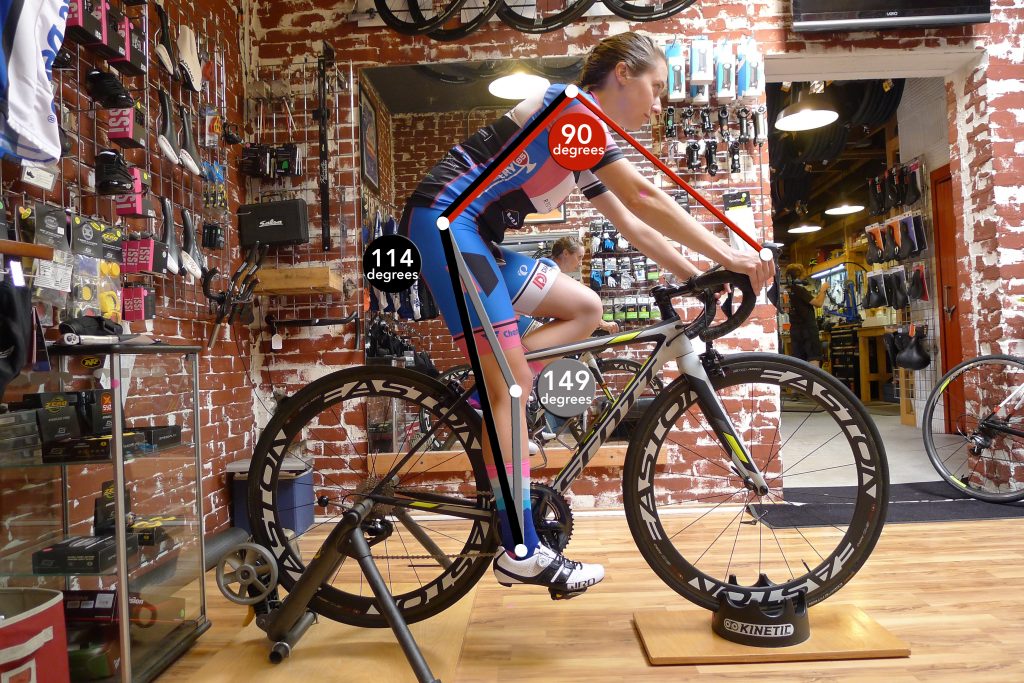 You’ll notice all measurements are identical to the larger bike, except for the shoulder angle which has been reduced to the target of 90 degrees. Looking at the bike in action, we can see how the change in weight distribution improves cornering. 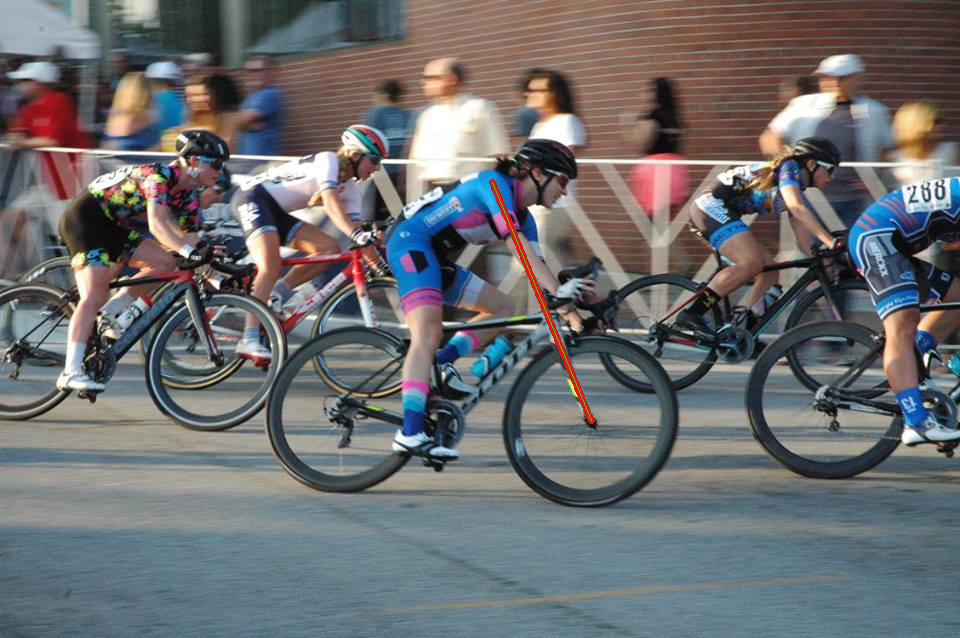 Guilbert’s shoulders (red line) are now directly in-line with the bike’s steering axis (green line), allowing her to drive the front wheel into the ground as she counter-steers into the turn.

Here is the difference between the two bikes by the numbers:

To return to our original analogy, had Guilbert been a casual rider whose bike didn’t need to perform in extreme conditions, we may have just tailored her “off-the-shelf” fit with a shorter stem – but, just as someone needs a suit or dress cut a differently for walking the red carpet or for spending nights out dancing, one needs a bike set-up differently depending on how it is to be used. In the end, an experienced bike fitter will make decisions based not just on how your body fits your bike, but how your bike fits your needs.

Guilbert didn’t have time for a test ride and wound up racing her new frame days after picking it up:

“Despite a very fast race (25.7 mph!), congested corners, and being forced over the feet of the barriers multiple times, this bike made my ride easy (as easy as a pro crit can be, anyway). Thank you so much Scott Bikes and David LoSchiavo!”